My friend Doug—who always cooks the best gumbo in the world at the Crawfish Derby and Oyster Roast—called me one day a few weeks back and said “Hey John, why don’t we throw a fundraising party for the Lakeside baseball teams. We could do a Mardi Gras theme. People would dress up and we’d give out beads and make hurricanes for the adults as long as they bring a little rum with them. I’d make a huge pot of chicken and sausage gumbo again. You could smoke some beef briskets. We could rig up that new 4-gallon fryer of yours and fry fish and shrimp so people can eat po-boys. We could make some Cajun cole slaw and vegetarian Mardi Gras pasta. You could set up a cash oyster bar and personally open cold raw oysters for people. It would also be kid-friendly. They could eat (affordably, I might add) and then go play sandlot baseball or other games in the field. I would hand-fry beignets and cover them with powdered sugar for dessert. We could have a wine pull as part of the fundraiser. And I bet you could make a keg magically appear.”

So after that phone call, we sprung into action, and did exactly what my friend Doug said we’d do. The fresh-fried beignets at the end of the event were a happy moment for all who were there.

Over 130 people attended the party, and the dugout club received some awareness about the program and cold hard cash to continue improving the facilities.

Here’s what the President of the Lakeside Dugout Club had to say:

“I wanted to add my congratulations and sincere thanks for the Mardi Gras festival on Saturday. Both during the event, and even more so upon further reflection, I thought it was absolutely fantastic. The food was amazing (and everyone I spoke to said the same). I’ve never had better gumbo or brisket. The decorations and music were perfect. I loved the festive yet casual vibe.” — Michael G.

Thank you, Michael, for your compliments. This was a fun event and we hope we have started a yearly tradition. 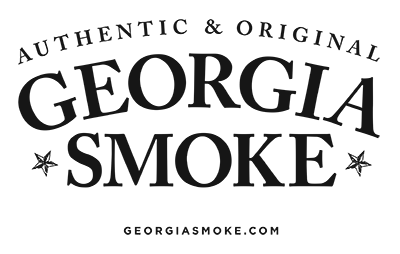 Please Note: We are booked through Fall of 2022.

Comments or questions are welcome. 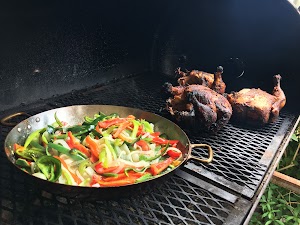 Wal Do
17:37 02 Dec 21
Never ate there because the address 1796 Oak Grove Rd is where residential houses are, not a resteraunt.

francesca ferrero
12:15 12 Sep 21
Georgia Smoke was easy to work with for my wedding reception bbq. They worked with me to provide a custom menu including fresh oysters, a hog, pulled pork, brisket and many sides! Additionally, they were able to work with the event covid requirements. The day of the event, the food was prompt, beautifully displayed, and everyone kept complementing the food and service both during and after the event. At the end of the night, the leftover food was neatly packaged and labeled for easy transport back to my freezer. Thank you Georgia Smoke for a delicious dinner!

Hillary Pearson
15:45 09 Dec 20
John and Georgia Smoke were absolutely amazing to work with. They catered an outdoor, intimate birthday party for our Mom's 60th and it was PERFECT! The oysters were a huge hit --- and the BBQ was delicious!!! Our guests were raving!!! The set up was fantastic and John worked with us to curate the perfect set up for a Covid-friendly/appropriate shindig. His set up + breakdown was also super efficient. Would 100% work with them again and recommend for your BBQ + Oyster event! THANK YOU!!!

Hannah Pearson
18:46 06 Oct 20
We worked with John and his team at Georgia Smoke to throw a backyard oyster roast/BBQ, and it was perfect. They could not have been more professional or easy to work with. And the food was UNBELIEVABLE! We will 100% be working with them again and recommend using them to anyone who is throwing a party!

Richard Lenz
18:42 06 Jul 20
Georgia Smoke without fail delivers THE most authentic and delicious, smoked pork butt and beef brisket I've been able to find in Georgia. If you get a chance to enjoy any offerings from GS, do not pass it up.

Daniel Acker
14:30 06 Jul 20
Georgia Smoke is the best brisket I have had in the city of Atlanta by far. John obviously knows what he is doing when it comes to preparing brisket. He is a real joy to work with and makes the whole process effortless. I am very happy I ordered from Georgia Smoke and will be looking to have him cater my next get together, that's for sure.

Cara Barineau
14:57 05 Jul 20
This is a company that really cares passionately about quality and happy customers. We’re big fans!

Ash May
02:40 08 Nov 19
Georgia Smoke catered our wedding, our guests could not stop raving about the delicious barbecue. Also, John Lenz is a true professional, he and his team checked in with us throughout the night to make sure everything was perfect when serving. Highly recommend, if you are looking for Fantastic, mouth watering barbecue, look no further!

Ash May
02:39 08 Nov 19
Georgia Smoke catered our wedding, our guests could not stop raving about the delicious barbecue. Also, John Lenz is a true professional, he and his team checked in with us throughout the night to make sure everything was perfect when serving. Highly recommend, if you are looking for Fantastic, mouth watering barbecue, look no further!

Todd Mack
15:59 26 Feb 19
Georgia Smoke create's some of the best BBQ you will find anywhere in the south. Beyond their amazing food, they are incredibly accommodating and a pleasure to work with. Highly recommended for your next event.

Joe Bosso
13:35 30 Oct 18
I had a wonderful experience using Georgia Smoke! We ordered BBQ, Brisket, and oysters (raw as well as steamed) and it was all great! John was extremely professional and easy to work with, and we are already discussing the need to find another opportunity to hire them again.

Sarah Marcelline Lovatt
22:35 29 Oct 18
HIGHLY recommend Georgia Smoke! John and his team did a fantastic job catering our wedding. He was incredibly professional and dedicated to make the event perfect! Everyone enjoyed shucking oysters, and the barbecue was great. It was perfect for a casual wedding event, and John is a delight to work with.

Michelle Olsen
13:00 14 Aug 18
Georgia Smoke delivers again! Repeat customer! We hosted an open house at our Market with over 200 in attendance. Georgia Smoke was punctual and provided everything needed to offer a fabulous experience for all. Customers commented this was THE BEST barbecue they’ve ever tasted. And, the coleslaw was over the top! Thank you, Georgia Smoke. We look forward to our next event!

Layla L
15:34 30 Jun 18
John Lenz of Georgia Smoke provided a fantastic meal for my family reunion. We had 100 members of our family come in town from all over for a weekend of events, kicked off by a huge meal. Georgia Smoke cooked pulled pork, beef brisket, chicken, and smoked salmon as main foods. The sides were great too. Everything tasted great, was hot and fresh and we ate every bite. I highly recommend Georgia Smoke. I will be hiring them again!

Bill Piercy
15:04 18 Jun 18
For the third year in a row, I hired Georgia Smoke to cater the skeet shoot and BBQ event that I host for clients, friends, and referral sources. I have come to expect good food and great service from Georgia Smoke BBQ. Even with these high expectations, I came away impressed. The food was great, the service professional, and the overall experience was painless. It is truly comforting to hand off an important piece of my biggest marketing initiative of the year and know that it will be handled well. This is the peace of mind that Georgia Smoke delivers. Thank you John, for another great year!

Melanie Stockwell
14:11 03 May 18
For my 50th birthday party I wanted to have an old fashioned pig roast and invite a lot of people. So my husband and I contacted Georgia Smoke BBQ and they delivered just what I had in mind. They smoked a pig which was laid out for people to pick. It made for a great conversation starter and everyone raved about the pork and all the sides. We had smoked brisket and salmon too and everyone loved these as well as all the sides. Everything was on time and was served appropriately, just right for an outdoor summer party. It was fun! John really wanted to deliver the vision I had for my party and it was perfect. I am already planning a future event with Georgia Smoke.
See All Reviews